Coenzyme Q10 (CoQ10) plays an important role in the body’s energy production, in addition to acting as an antioxidant. CoQ10 may also hold potential as a weight loss supplement because it:

Coenzyme Q10 (CoQ10), also known as ubiquinone or ubidecarenone, is a vitamin-like substance found in all human cells. CoQ10’s main role is to participate in aerobic cellular respiration, the set of reactions used to generate most of the energy (ATP) needed by the body.

This critical role explains why organs that require a lot of energy — such as the heart and liver — have the highest CoQ10 concentrations in the body.1In addition, CoQ10 as ubiquinol also acts as an antioxidant – a substance which protects cells from damage caused by free radicals and oxidative stress.

Since its energizing, anti-aging effects can influence all cells in the body, Coenzyme Q10 (CoQ10) is used to help with a wide variety of health concerns, including lesser known areas like gum health and exercise performance. CoQ10 is probably most evidence backed for its potential in cardiovascular health applications.

CoQ10 is produced naturally in the body. It can also be obtained through diet; good sources include liver, kidney, beef, sardines, mackerel, and peanuts.

When we’re young, we can easily make our own CoQ10. But as we get older, we lose the ability to make our own CoQ10 and absorb dietary CoQ10. Older adults also seem to have a harder time converting CoQ10 into ubiquinol, the active antioxidant form. This decline worsens after age 40, with levels dropping in organs at different, but steady, rates: 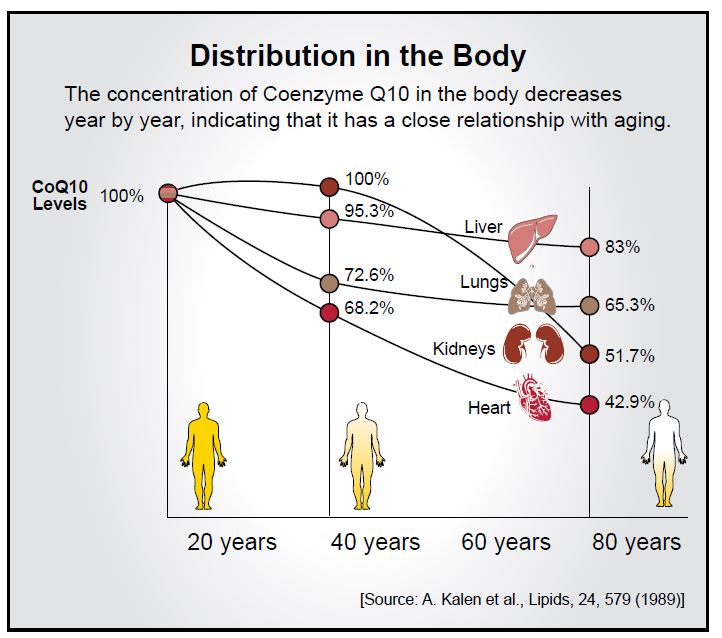 Age isn’t the only factor draining our CoQ10 levels. Statin drugs, which lower cholesterol and are among the most widely prescribed drugs on the planet, also deplete CoQ10. This is an ironic twist because CoQ10 is excellent for cardiovascular health, but may be reduced to potentially risky levels by a popular class of cardiovascular drugs. Some research suggests CoQ10 depletion may even result in “misfiring” of cells’ mitochondria power plants.2 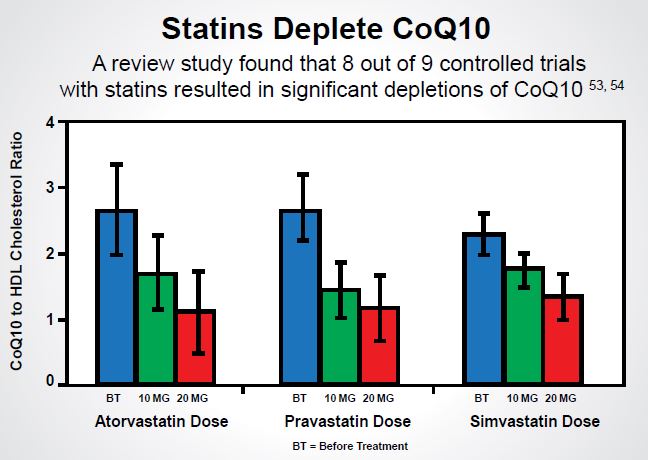 There’s good news too: Supplemental CoQ10 can help to maintain blood levels against the depleting factors of aging and statin drugs.

In fact, some experts have stated that statin-induced deficiency can be completely reversed with CoQ10 supplementation.3

But in this piece, we’re looking at CoQ10’s potential as a fat burner, only.

And right off the bat, considering that heart drugs and aging are both linked to CoQ10 decline, we can theorize that low CoQ10 may also be associated with age- and inactivity-related weight gain. Although research in this area is scarce, Coenzyme Q10 has been suggested as a possible fat burner and weight loss agent.

One 2014 review paper even suggested that “Co-Q10 supplementation has proven its efficacy and benefit to treat metabolic syndrome and obesity. Further research is warranted to get benefit in a clinical setup.”4

The exact interactions between coenzyme Q10 and weight loss are not currently known. But let’s take a closer look at the mechanisms of action by which CoQ10 might help with fat loss efforts.

Adipogenesis is the process through which precursor cells called preadipocytes turn into new fat cells. In particular, CoQ10 appears to stimulate AMPK, an enzyme which controls energy balance in cells, in turn leading to reduced storage of energy as fat. This effect also appears to increase fat oxidation, meaning that more fat is burned up for energy rather than stored for later use.5

In particular, recent research suggests that dysfunction of the mitochondria—the energy-producing structures found in most cells—may play a key role in the development of obesity and other metabolic syndrome conditions such as high blood pressure. As such, it is believed that CoQ10 may reduce oxidative damage in mitochondria and alleviate metabolic syndrome. It may be no coincidence that 80% of CoQ10 is found in cells’ mitochondria.6

Given the fact that inflammation has also been linked to the development of obesity, it’s possible that CoQ10 could also be helpful through this action.9 In particular, CoQ10 has been found to reduce the release of inflammatory compounds known as cytokines, and reduce inflammation in the liver and other tissues.

Did you know? In one study on CoQ10 and inflammation, researchers treated isolated human cells with either placebo, or one of 3 antioxidant substances: CoQ10, PDTC, and NAC. Afterwards, the cells were stimulated to release inflammatory cytokines. CoQ10 was found to significantly reduce the inflammatory response, reducing release of cytokine TNF-α by 60%, MIP-1α by 48%, and RANTES by 74%.10 This may suggest potential for inflammation-related weight problems.

Bioenergetics refers to the flow of chemical bond energy in all living things.11 CoQ10 is a necessary cofactor in all bioenergetics. And, just as it protects mitochondria, CoQ10 fuels it during energy metabolism, helping to support efficient conversion of fatty acids into power. While these benefits appear to contribute to fat burning efforts, keep in mind that they are early and theoretical.

Animal research of coenzyme Q10 suggests that its impairment could have a role in the development of obesity, and that supplemental CoQ10 could be helpful for blocking weight gain.

The goal of this extensive study was to examine the role of coenzyme Q10 in obesity and fat cell formation in humans and mice. The researchers isolated fat cells from obese and lean mice and human patients. They found that CoQ10 levels were significantly lower in the fat tissue of obese individuals compared to their lean counterparts. This trend was reproduced in mice on a 12-week high-fat diet, who simultaneously gained fat and had lower levels of CoQ10 in their fat tissue.

In addition, the researchers also found that inhibiting CoQ10 in mouse preadipocytes (the precursors to fat cells) triggered their transformation into fat cells, while increasing CoQ10 had the opposite effect, reducing the formation of new fat. The study also discovered that below a certain level of CoQ10 in fat tissue, all mice and human subjects were obese.

In addition, all mice and human participants of this study were found to be obese below a certain threshold level of fat tissue CoQ10, which suggests that the reduction of CoQ10 could play an important role in the development of obesity across different species.

This study tested the theory that mitochondrial oxidative damage could be one of the causes of metabolic syndrome—a group of conditions which includes obesity. Mice with metabolic syndrome were fed a high-fat diet and split up into 2 groups: placebo, and water supplemented with MitoQ (100 μM at week 1, ramped up to 500 μM by week 5). MitoQ is a special form of coenzyme Q10 designed to accumulate in the mitochondria. After 14 weeks, MitoQ mice had reduced fat gain, blood sugar & cholesterol, and other parameters of metabolic syndrome compared to the placebo group.

Current human research into coenzyme Q10 for weight loss is limited, and only indirect effects and mechanisms have been found.

This study examined the effects of supplemental coenzyme Q10 (CoQ10) on energy metabolism in 11 healthy men at rest and during low-intensity exercise. The participants were given capsules with either placebo or CoQ10 (30 mg) and then exercised on a cycle ergometer for 10 minutes. The CoQ10 group was found to have increased fat oxidation during exercise, which could possibly boost weight loss achieved through exercise.

In this weak study, 11 morbidly obese patients between the ages of 28 and 62 were tested for their CoQ10 levels and antioxidant blood levels before and after biliopancreatic surgery, with results contrasted against a control group of 10 slightly overweight women. Researchers, who linked obesity to oxidative stress, went on to find that in the morbidly obese surgery group, levels of CoQ10 and other antioxidants were extremely low post-op; and that the surgery appeared to reverse many metabolic syndrome-related issues.

No dosage recommendations currently exist; the only mention of coenzyme Q10 for weight loss in professional literature suggests 100 mg daily.15

CoQ10 supplements range in dosage from 50 mg to 400 mg. Ubiquinol supplements are typically presented in smaller dosages, in the range of 100 mg to 200 mg, because Ubiquinol is considered a more potent CoQ10 form.

Coenzyme Q10 is generally very well tolerated. It may cause mild side effects such as nausea, loss of appetite, vomiting, diarrhea, or an allergic skin rash. It is advised to split CoQ10 into 2-3 doses to reduce likelihood of side effects.

Coenzyme Q10 (ubiquinone) is one of the most popular nutritional supplements on the market. As a result, there it comes in many delivery forms, presented in standalone supplements and complex formulas.

Advanced CoQ10 Forms: CoQ10 is hard to absorb — and this only gets harder as we age. There are several branded forms of CoQ10 featuring patents that help to assist with CoQ10 absorption. Some of them combine CoQ10 with black pepper extract to improve its absorption.

Ubiquinol: CoQ10 must be converted by the body to ubiquinol in order to provide antioxidant activity. Ubiquinol in supplement form is “pre-converted.” Some research has shown ubiquinol to be far more bioavailable than CoQ10, but it is also more expensive and not backed by as much human research.

Taking an advanced CoQ10 form is a smart idea. CoQ10 just gets harder for the body to absorb and use with age. Taking an enhanced-absorption form of CoQ10 (such as those paired with BioPerine black pepper extract) is a good cost effective insurance policy. Ubiquinol is probably even better, but only if you can afford its high price tag.