You are here: Home / Nootropic / Lemon Balm as a Nootropic

Lemon Balm has been used since the Middle Ages to reduce anxiety, soothe stress and promote sleep.

Named after the Greek word for “honey bee”, Melissa officinalis was prescribed as a medicinal herb in ancient Greece, and was steeped in wine prior to the Middle Ages to promote general “healing of the spirit,” among other uses. During the Middle Ages, lemon balm was used to help with a variety of mood and emotional issues, as well as being used as a natural sleep aid.

Native to Europe, today lemon balm is grown throughout the world in herb gardens, bee colonies, and in commercial crops for herbalism, aromatherapy, cosmetics and furniture polish.1

A combination of Oleanolic acid, Ursolic acid, and Rosmarinic acid work together to induce GABAergic activity through a mechanism as yet unknown, and not common to other nootropics.

The results of one study suggests the three-tiered combo poses a triple threat to GABA transaminase (GABA-T), a targeted enzyme in the treatment of anxiety and related neurological disorders. By inhibiting GABA-T, Lemon balm encourages an increase of soothing GABA A production in the brain.2

Some animal studies have singled out rosmarinic acid as the main contributor to lemon balm’s anxiolytic effects, which researchers have suggested may be comparable to a leading anti-anxiety drug.3

In patients with Alzheimer’s, M. Officinalis may mediate the cholinergic neuron loss that results in many of the cognitive disturbances associated with the disease. Lemon balm contains choline, which binds to cholinergic receptors and blocks acetylcholinesterase, effectively preventing the decline of acetylcholine and nicotinic receptor populations that is a typical antecedent to cognitive decline in Alzheimer’s.4 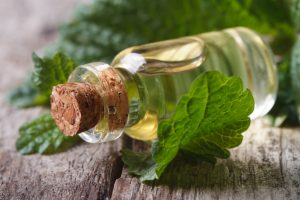 Did you know? Lemon balm essential oil is popularly used in aromatherapy practices for its soothing effects. In one study, 72 patients with severe dementia had aromatherapy lotion infused with lemon balm essential oil or placebo (sunflower oil) twice a day for four weeks. At the study’s end, lemon balm aromatherapy was associated with significant improvements in agitation, social ability, productive activity, and other quality of life indices. Researchers reported that using Melissa officinalis in this way appeared to be a safe, effective therapy for helping the mental states of those with severe dementia.5

Some human studies suggest that lemon balm may enhance memory performance, especially at high doses, possibly making it a helpful supplementary therapy in the treatment of memory loss associated with Alzheimer’s.6 While lemon balm can improve the accuracy of memory, it can also slow the speed of memory recall due to its sedative-like properties.

Getting enough deep sleep is very important for proper brain function, and a good night’s sleep- or the lack of- can make or break the brain’s ability to function at its best. In one study using the patented Melissa Officianolis extract Cyracos, 17 out of 20 patients (85%) experienced full remission of insomnia.7

One of lemon balm’s most well-known properties is the ability to reduce anxiety and calm the nerves. Animal and human research studies have demonstrated Melissa’s ability to relieve anxiety and lower stress, including a landmark study that proves that regular use relieves stress-related effects on the brain.8

This 2004 randomized, double-blind, placebo-controlled, balanced crossover experiment was the first study to explore lemon balm’s ability to reduce laboratory induced stress. 18 healthy volunteers were given 300 mg or 600 mg of lemon balm and a placebo on different days, then took a 20-minute version of the Defined Intensity Stressor Simulation (DISS) battery. Mood was measured 1 hour before and 1 hour after taking the supplement followed by the test.

This small, well-designed study administered healthy volunteers with either 300 mg or 600 mg (or placebo) of a standardized lemon balm extract, separated by a 7-day washout period between administering the next dosage or placebo. Prior to supplementation and one hour after supplementation, study subjects were tested for mood and cognitive performance during laboratory-controlled stress-inducing simulations. At the study’s end, researchers reported that the 600 mg dose of lemon balm improved the subjects responses to stress, instilled calm and reduced alertness. The 300 mg dose was found to accelerate mathematical processing ability without reducing accuracy.

Lemon balm is most available in supplements that combine it with other medicinal herbs, and valerian is a popular companion to lemon balm in nootropic supplements. In this randomized, double-blind, placebo-controlled, balanced crossover study, researchers gave 24 volunteers 600 mg, 1200 mg, and 1800 mg doses of a standardized product containing both lemon balm and valerian or a placebo then administered the Defined Intensity Stressor Simulation (DISS) battery.

This systematic review gathered studies from 9 major clinical research databases to find randomized controlled studies assessing people 65 and older with Alzheimer’s (AD) in order to determine if herbs could be used to successfully treat Alzheimer’s.

In this study, patients with mild to moderate Alzheimer’s were given either a placebo or 60 drops per day of a lemon balm extract for a period of four months. At the end of this testing period, researchers reported that the lemon balm group showed a significantly better outcome on cognitive function than the placebo group.

Lemon balm might enhance the sleepy effects of sedative drugs or pain medication, and you should not take it before surgery as it may compound the intensity of anesthesia. Other than that, lemon balm has been used safely for thousands of years with no deaths or serious side effects reported. Clinical trials have used it safely for up to four months, but there is no scientifically-backed evidence for longer-term use.

Lemon balm is a legendary mood soother. It has been used to calm frazzled minds for centuries. But we’re even more intrigued that lemon balm’s calming effect seems to boost some aspects of cognitive performance, suggesting it may also have nootropic activity. Evidence showing lemon balm helps dementia patients seems to add more layers of support for brain health and mental processing power.