Multi-faceted Trifolium pratense may have weak anti-estrogen activity that is suggested to maintain T.

A longstanding traditional herbal remedy, red clover is sometimes included in testosterone booster complexes. While evidence supporting its use for testosterone is early and conflicted, some researchers and supplement formulators have theorized red clover might help T levels by:

Red clover is a member of the bean family, with early descriptions using it as a main food source for cattle. Medieval Christians associated the three leaves as a resemblance to the Holy Trinity and sought to use it in many aspects of diet and additives. The herb was first utilized in 1917 as a blood purifier and  amplified in the 1930s as a supposed anti-tumor remedy, in which its beneficial effects are still in popular use today.

Trifolium pratense contains coumarin, which is a natural organic molecule that is used in dyes, perfumes, and to help with asthma. It also contains compounds called isoflavones, which have antioxidant and phytoestrogenic actions.


These isoflavones have been suggested to regulate estrogen levels — which in turn affect testosterone — and are believed to be the “active ingredients” behind red clover’s potential T benefits. In theory, a reduction of female sex hormones such as estrogen would in turn increase the ratio of testosterone in the bloodstream.

The effects of taking red clover are shown to increase LH when compared to control groups.1 This hormone acts upon Leydig cells of testis which in turn produce testosterone. Unfortunately, this mechanism of action has seen little research.

May raise amount of liver transaminase

Yransaminase is an enzyme involved in converting molecules for energy and manipulating amino acids for use in the body. High levels of transaminase are associated with exercise and heavy workouts,2 but can also indicate liver problems. Research suggests that consumption of red clover isoflavone can nearly double transaminase levels, while keeping them within healthy limits.3

Although liver enzymes do not directly affect testosterone levels, they may be correlated with increases in vitality and similar health benefits as an increase in testosterone.

Acting as an anti-estrogen supplement to reduce estradiol

Estradiol is classified as a bodily steroid and estrogen sex hormone that maintains female and male reproduction. When taken in regular intervals, consumption of red clover has been linked to an overall decrease in estradiol and similar hormones. This could — in theory — have a pro-testosterone effect for male sexual vitality.4

Seems to reduce conversion rate of testosterone to DHT

Dihydrotestosterone is a vital hormone for developing males, but is reported to contribute to baldness in later years. It is directly converted from testosterone, so a decrease of DHT levels is, in theory, immediately related to increases of testosterone. Isoflavones, the pronounced ingredient of red clover, has been shown to reduce conversion rates and lower DHT levels within the bloodstream.5 This mechanism is achieved by 5-α-reductase, an enzyme located throughout the body such as the prostate, skin, and liver. Publications concerning this aspect are few and far between, and the studies that do exist are minuscule. The narrow field of view should be taken into account when judging this beneficial factor.

Red clover is included in some Testosterone Booster formulas because of its “anti-estrogen” activity, which in theory would shift the balance towards T. It also appears to have prostate-protective effects that may reflect healthier testosterone levels. But overall, red clover’s reputation as a women’s supplement and unsteady evidence seem to position it as more of a “wildcard” testosterone supplement.

Applying red clover to dedicated animal experiments seems to be an ongoing process. Current research seems to support some theories that red clover might:

While the first research article pointed out some promising results for the production of testosterone, the following three are what remain of limited relevant data. Two of the studies point towards an estrogen-oriented benefit, which does not support the idea of a male-benefiting herb. The final study solely benefits males, but does not necessarily affect levels of testosterone.

Did You Know? Red Clover is often featured as a bone-strengthening supplement for men and women. It is claimed to aid quite well in menopausal women combating osteoporosis. A large majority of research shows positive outcomes, such as this medium-sized trial.10

Human research seems to be much more prominent than animal works, studying women much more than men for the benefits of adjusting hormones in post-menopause. Two medicinal trials stood out as irrefutable sources of observation:

A smaller study in 2007 gave men aged 40-75 whom had family history of colon problems 84 mg of isoflavone, a pronounced ingredient in red clover. This was done over the course of two months with frequent intervals of study, such as colonoscopies. Others of the same category were given a placebo in order to contrast measured differences in insulin-like growth factors. IGF proteins are commonly associated with testosterone hormones, as both act towards similar physiological goals and operate under comparable time frames. This makes testosterone and IGF easy to compare, as both are commonly considered to always act in a complex relationship.11

The majority of trials assessed had a duration of 2-3 months, with the shortest lasting 1 week and the longest 4 years. Archives such as PubMed and CAB Abstracts were searched to find relevant data on the effects of red clover when taken under professional supervision and observation. Amounts given ranged from less than 10 mg daily to more than 150 mg daily in isoflavone intake, and the age of participants was between 21 years and 74 years of age. Those engaging in the trial with prostate concerns roughly equaled those who had none. Using statistical analysis several models were made to compare results from across the board.

43 women aged 61-75 whom were all postmenopausal were given 40 or 80 mg of phytoestrogen daily to compare with sex hormone-binding globulin (SHBG) levels in the bloodstream. SHBG proteins bind to testosterone and other sex hormones and render them useless, so controlling their numbers may prove to assist in adjusting overall sex hormone quantity. 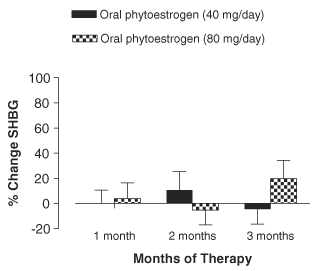 20 men aged approximately 65 were given a daily dose of isoflavone extract to study effects. As previously discussed, an increase of transaminases can indicate increased levels of excersise, or possibly liver issues. High amounts of PSA are correlated with prostate issues in aging men.

A statistical model was used to assess levels of testosterone, SHGB, and other related hormones after women in the study had taken red clover supplements. For testosterone, three previous studies were assessed for data on menopausal women which showed testosterone levels increasing slightly but significantly. When amounts of SHBG were measured during research trials, all four trials that were analyzed showed a total decrease in SHGB.

Three of the previous studies seem to state similar rejections of red clover’s proposed testosterone benefits. However, the meta analysis focused on women had hopeful summaries along with the research showing a strong claim for the increased prostate protection. All in all, testosterone’s benefits do not seem to come through in these studies. The size of these findings are quite varied, but their results are thorough and unmistakable.

The majority of research agrees that red clover is indeed safe for consumption within limits. With other medications, red clover is known to alter the rate at which these drugs are broken down within the liver.16 Few have reported symptoms such as muscle ache, nausea, or rash-like reactions, but this may be related to exceeding the recommended dose amount.

Did you know? Due to the fact that red clover resides in the bean family, many of the healthy ingredients can be found in related beans. In fact, many research papers concerning isoflavin are used with a medicinally extracted soy bean.

Traditional methods of red clover have been through ointments on wounds or drying and adding with tea or medicine. In present times, oral consumption reigns as the most common form:

Research on red clover for testosterone seems to constantly disagree. Results are variant at best, with some advocating for its androgen-boosting abilities and others for pro-estrogen outcomes. There are few risks in attempting to utilize the plant, and it has shown to be effective in other regions of health, but to solely ingest red clover for testosterone improvement is an unpredictable venture.

50-70 mg daily in nutrient isolated form should be enough to get an idea if Red Clover helps. While most research falls between a daily intake of 40-80 mg, this is done under the supervision of licensed professionals. There are better Anti-Estrogen T-boosters to explore, backed by more evidence than Red Clover.