Essential for men’s virility and testosterone production, Vitamin D is widely deficient and declines with age. 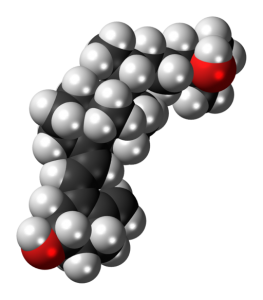 Evidence makes it pretty clear that Vitamin D is tied to healthy T-levels in men. The only question is, how does it work? Nobody knows (yet), but some possible bio-activities and pathways include:

Other Benefits for Men

Most known for helping immunity and bone density, Vitamin D recently went from relative obscurity to red-hot sales as an “overall health” vitamin. The new scoop, however, is that Vitamin D boosts T–and it appears to do this very well. Vitamin D, especially in the superior D3 form, has now become a popular men’s supplement for testosterone and more.

What we know: Plenty of strong evidence correlates good Vitamin D status to high T-levels. One large population study found the inverse to be true, as well. In this study, Vitamin D deficiency was tied to hypogonadism: Teste shrinkage and man-boob growth caused by exceedingly low T-levels.2

Science doesn’t know how Vitamin D boosts T, at least not yet. But its location may be a hint: Vitamin D, Vitamin D Receptor sites (VDRs), and Vitamin D-metabolizing enzymes are all highly concentrated in the male reproductive system… including within testosterone pathways.

One consequence of male sex hormone deprivation is that bones turn weak and brittle. When T is low, calcium doesn’t absorb properly–bone mass is lost. Vitamin D is amazing for bone health because it boosts calcium absorption. This apparent interconnection between T, bone strength & Vitamin D seems to be relevant and significant to masculine health.

The big problem with D? We’re just not getting it.

When exposed to sunlight, our skin can synthesize Vitamin D… But many simply aren’t getting enough sun. Those who bask in sunshine and (wisely) use sunblock may not be getting D benefits: Even using a weak SPF 8 sunblock will reduce skin Vitamin D synthesis by 95%.4

In our daily diets, Vitamin D can be a little challenging, but doable: It is found in milk (via fortification), and in some fatty fish. Despite dietary sources and the ABSOLUTELY FREE Vitamin D that can be obtained by standing out in the sun for a few minutes, most men fail to get enough Vitamin D. This nutritional shortfall is a lot worse than you might think:

The Most Widespread Nutritional Disorder in the World…

… is Vitamin D deficiency. In America, some research suggests nearly 75% of adults are insufficient in Vitamin D. Globally, 1 BILLION people are believed to be insufficient!5 Falling short on D could cause big problems for  men’s testosterone levels, especially as we get older.

Part of the problem is, Vitamin D is like a nutritional puzzle. As we age, we need more Vitamin D. But as we age, we also lose the ability to absorb and use Vitamin D. Getting Vitamin D is so challenging, researchers have acknowledged that “supplement use is an important contributor to achieve minimum target levels.”6

In one study on male rams, Vitamin D (as D3) was shown to activate and energize the testes’ Leydig Cells (“T-factories”). Then, when combined with Luteinizing Hormone (LH), D3 appeared to significantly boost testosterone (ram study).7 This ram study is intriguing because it suggests a “mechanism of action” that’s consistent with its presence in the male reproductive tract.

Human studies are where Vitamin D holds the most weight for boosting T. Check out these three clinical trials, and note their similarities:

In a study of 165 healthy-but-overweight men who were dieting, researchers administered either 3,332 IU Vitamin D or placebo daily for 1 year. At the study’s conclusion, researchers reported that the supplement group experienced a significant across-the-board T-boost:

A team of German researchers investigated how Vitamin D levels might affect the hormone levels of a fairly large pool of participants: 2,299 men. Researchers discovered that men with sufficient Vitamin D had significantly higher levels of testosterone and a better Free Androgen Index (FAI) ratio of T to SHBG (female sex hormone).10

Our take: Vitamin D seems to be an effective T-Booster by strong association.

We have reviewed some fairly large studies on Vitamin D and testosterone that seem to reach the same conclusions:

Abundant evidence suggests Vitamin D is strongly correlated to healthy T-levels. Where evidence seems to be lacking, however, is in a definitive explanation of D’s exact T-boosting mechanisms of action. Scientists don’t know how Vitamin D does it, but many seem to agree: It works for boosting T.

Could Vitamin D be a natural aromatase inhibitor?

The IU thing is kind of annoying, since we’re all conditioned to evaluate supplement dosages as a measure of weight. But, now you know how IU works in Vitamin D supplements.

The National Institute of Health (NIH) says taking 4,000 IU of Vitamin D daily might be risky because of its potential to dramatically raise blood calcium to unsafe levels. But right away they also acknowledge that higher Vitamin D doses are required in cases of deficiency. It’s a mixed message, but one NIH tip is clear: Only take mega-dose Vitamin D under a doctor’s direction.

Vitamin D2 (ergocalciferol): This form, invented in the 1920s to fight rickets, produces D2 by exposing foods to UV radiation. Despite some marketing claims, D2 may be absorbed just as well as D3. D2 spikes blood levels, but crashes fast.

Vitamin D3 (cholecalciferol): D3 spikes and sustains blood levels, making it 3X as potent as D2, Vitamin D3 is the natural form that your skin makes when exposed to sunlight.14 The body seems to prefer D3, and uses it with far greater efficiency than it does D2.

Ties between Vitamin D and T levels are simply too strong to ignore. Testosterone benefits, whole body health and excellent tolerability make Vitamin D a great fit for any T-booster program. The D3 form is an easy call: It’s stronger and easier to utilize than D2, especially for older men.

5,000 IU is a higher dosage, but we think it’s justified given today’s apparent low-D epidemic. 5,000 IU is also the doctor-recommended dose from the Vitamin D Council. If you buy a T-booster with Vitamin D, look for magnesium too: It may have synergy with D that enhances T-boosting activity.15

Inside Scoop: Don’t Step in D2

The supplement industry has almost completely phased out D2 at this point. D3 is so much better, and everybody knows it. If you buy a straight-D supplement, most will be D3. But be warned: Sketchy brands will still try to pawn off D2… because it’s a cheap ingredient that improves their profit margins.

If you’re buying any kind of complex with Vitamin D–multivitamins, bone health formulas, T-boosters–check to see what kind of Vitamin D they are using. If it’s D2, ditch that brand altogether.