You are here: Home / Nootropic / Citicoline as a Nootropic

Citicoline is a multi-tasking nootropic that primes, powers and multiplies brain cells for better focus and attention.

Citicoline rejuvenates brain cell health, structure and function in many ways. It is believed to work as a:

Citicoline has many biological actions that help the brain, but it is first and foremost a “choline donor,” providing raw materials for the synthesis two other notable “cholines”:

Both phosphatidylcholine and acetylcholine are believed to decline with age, which may dull cognitive function.3 4 Citicoline may boost both of these brain-critical substances–and in doing so, reverse age-related cognitive decline. Citicoline’s support for these two critical neural substances appears to be amplified by its next big brain benefit:

This benefit is crucial because the brain is your most energy-guzzling organ, consuming 20% of the body’s power supply.5 It also perfectly complements Citicoline’s other activities, because brain cell creation, repair and maintenance require a lot of energy, as does the electrical impulse-driven cell-to-cell communication that enables all brain (and nervous system) activity. 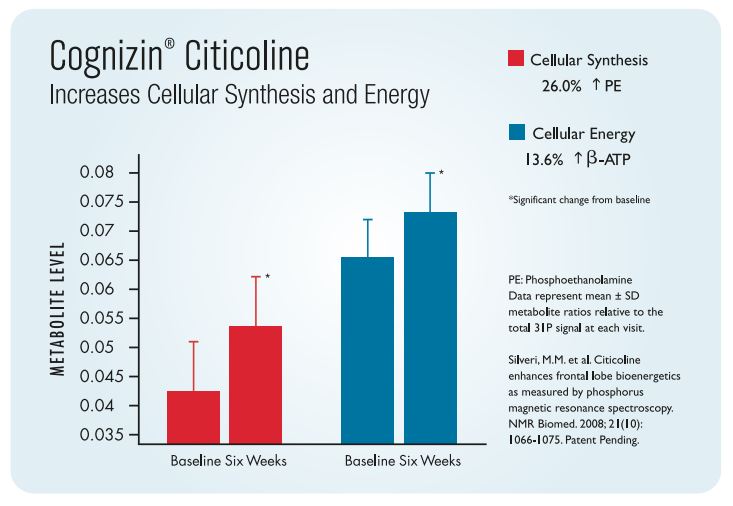 Our take: Citicoline’s brain activities are synergistic. Each of its brain benefits seems to amplify the next… and they combine to profoundly enhance the brain’s structure and function.

Consider these bio-activities of citicoline, and how they seem to fit together and complement each other:

What’s especially exciting is that citicoline’s brain health benefits are backed by promising early human research. Let’s check out some of the best citicoline studies so far.

Quick, energized thinking. Citicoline nourishes and fine-tunes brain cells to improve attention span, focus and mental energy–a trifecta for peak mental performance in professional and academic settings. In older adults with cognitive decline, it seems to a rejuvenating effect on the brain: It enhances memory and may even reverse degenerative age-related brain changes.

In this study, 16 healthy men and women with an average age of 47 took either 500 mg or 2,000 mg Cognizin® Citicoline every day for 6 weeks and were then evaluated for changes to their brains’ structure and function. Testing revealed a 14% increase in brain ATP (“cellular currency” for brain energy) and 35% increase in brain cell membrane turnover (repair, rejuvenation & replacement).

In a double-blind, randomized, placebo-controlled three-arm study, 60 women between the ages of 40 and 60 were administered a daily dose of 250 mg citicoline, 500 mg citicoline, or placebo for a span of 28 days, and were then were given cognitive performance tests with an emphasis on attention. At the end of the test period, both doses of citicoline were associated with better test scoring, with the 500 mg dose tied to the best mental performance.

Is citicoline a “brain repair” nutrient?

Citicoline has been researched for its potential to help with brain injuries. Some research has shown it may effectively “heal” damaged brain cell membranes by increasing synthesis of the phospholipids that are used in neural repair.10 Citicoline’s brain energy benefits may help with healing too, by generating the power that’s needed for the energy-intensive task of neural repair.

Citicoline seems to be extremely well-tolerated; the biggest studies report absolutely no side effects. Some smaller research studies have reported rare, mild side effects including difficulty sleeping, upset stomach and headaches, but no major adverse events.

Citicoline is a dynamic nootropic. It gives you raw materials to make brain cells, PLUS brain chemicals, PLUS neural energy to power brain performance. Citicoline’s bio-activities seem to work together to sharpen the mind’s competitive edge–improving productivity and performance via attention span, focus and concentration. Beyond boosting mental performance, Citicoline is brain-regenerative: supporting fast-and-efficient brain cell synthesis, maintenance and repair.

We recommend Cognizin® for quality, but also because Kyowa–the company that makes Cognizin®–is a leader in citicoline research. They’ve invested a ton of money in clinical trials, and clearly believe in their ingredient. Kyowa suggests 250 mg (min.) for attention benefits and of 500 mg (min.) for mental energy and focus. Studies use bigger doses, but we suggest 250 mg to 500 mg as good a starting point to see what works for you.