You are here: Home / Nootropic / Pine Bark as a Nootropic

Pine bark, especially in patented form extracted from French Maritime pine trees (Pycnogenol®), has been suggested in research to support brain health by:

Pine Bark Extract (PBE) has a long history of traditional use, with health applications recorded in Ancient Greece and an early mention by Hippocrates for its ability to soothe inflammation.

Modern science has confirmed that PBE supplies a matrix of active antioxidants called oligomeric proanthocyanidins (OPCs), which are believed to account for most of its beneficial properties.

The Pine Bark OPC matrix is believed to be especially potent in terms of antioxidant activity, making it an effective supplement for anti-aging strategies focusing on the Free Radical Theory of Aging.

Pine Bark’s OPC antioxidants have also been found to be bioavailable, capable of raising blood antioxidant status and modulating inflammation.1

Pine Bark Extract’s “soothing antioxidant” properties have made it a popular and effective nutritional supplement ingredient for a range of health concerns.

Beyond its cellular anti-aging potential, PBE has been suggested to support:

In a nootropic context, Pine Bark Extract’s anti-aging benefits (and other beneficial bio-activities) appear to translate to long-range support for overall brain health.

However, emerging evidence indicates PBE may have more mental performance-oriented benefits as well, helping to support memory, focus and mental clarity. Pine bark has also been suggested to have possible therapeutic value for younger populations dealing with ADD/ADHD.

Let’s see how PBE’s nootropic mechanisms of action may work to support cognition.

Antioxidant activity helps brain health. Free radical-induced oxidative stress and vascular issues may be linked to cognitive concerns affecting memory, mental performance, and brain function. Age-related memory impairment is linked to low brain antioxidant levels, while researchers have said poor circulation to the brain may account for 80% of cognitive problems in the elderly.2

Research has suggested antioxidant flavonoids found in Pine Bark Extract’s complex may support the brain in additional ways; promoting neuroplasticity, an aspect of brain health that is strongly tied to memory and new learning; and stimulating neurogenesis, the regeneration of brain cells.3

Free radicals generate inflammation; by neutralizing free radicals, PBE is believed to modulate the body’s inflammatory responses. Some animal research has also suggested PBE seems to inhibit the release of pro-inflammatory histamines from mast cells.4 While this particular pine bark bio-activity has not yet been demonstrated to help brain health in particular, inflammation is strongly linked to some degenerative brain issues, so it bears mentioning.

Cerebral circulation is a key contributor to peak mental performance. Pine Bark Extract interacts with the endothelium to help encourage release of nitric oxide (NO), a compound that signals blood vessels to relax and widen. NO is also important for the signaling of neurons in the brain.5 This bioactivity enables the PBE complex to promote peak bloodflow to the brain, which may in turn assist with delivery of micronutrients, glucose and oxygen that are needed for energized brain function and healthy cognitive performance.

In a test-tube study, human pulmonary artery cells taken from the endothelium inner lining were exposed to beta-amyloid – a contributing factor to Alzheimer’s – for 24 hours. The damage to cells was then measured. Next, researchers pre-incubated the endothelial cells with pine bark extract (as pycnogenol), which was found to significantly minimize amyloid damage.

One clinical trial administered 1 mg of PBE (as Pycnogenol) per kg of bodyweight in children with ADHD. After 4 weeks, supplementing with PBE appeared to have a beneficial effect, apparently easing ADHD symptoms related to focus, concentration, overstimulation and physical coordination. The PBE was also reported by research to be associated with less catecholamine neurotransmitters (epinephrine, norepinephrine, dopamine) to be excreted in urine. This seems to suggest PBE may work in accordance with the catecholamine hypothesis for ADHD.

PBE may protect DNA in children with ADHD

In some children with ADHD, damage to DNA has been noted. One study examined how PBE (as Pycnogenol) might help, via its DNA-protective antioxidant activity. After one month of pine bark extract supplementation, researchers found that the children’s total antioxidant status (TAS) was raised, with greater increases noted after PBE supplementation stopped. Researchers also noted that DNA damage was reduced in the PBE group.

In this placebo-controlled study, 53 students between the ages of 18 and 27 were given pine bark extract as Pycnogenol for a span of 8 weeks and tested for various measures of cognitive performance. At the study’s conclusion, the Pycnogenol group was found to have 4.46% less failures in cognitive tests than the control group.

101 subjects between the ages of 60 and 85 took 150 mg Pycnogenol or placebo daily for three month. Throughout the study, the subjects were tested for multiple aspects of cognitive performance, including focus, memory and psychomotor skills. At study’s end, researchers reported that Pycnogenol appeared to significantly help with cognition, especially in the Quality of Working Memory index. The researchers also found that markers of oxidative stress known as F2-isoprostanes appeared to be reduced in the PYC group. Lower oxidative stress markers may suggest higher antioxidant activity in the blood and the brain. 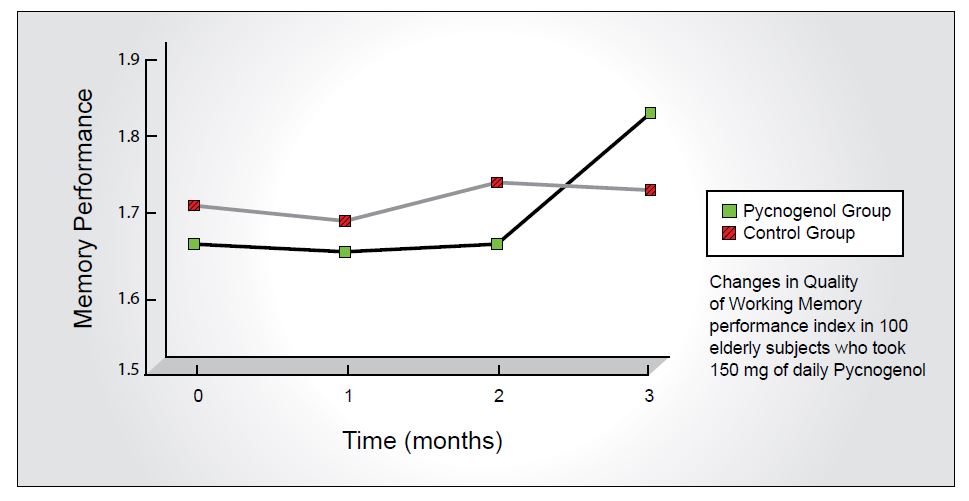 In this study, 60 professionals between the ages of 35 and 55 were administered a placebo or 150 mg of PBE per day (as Pycnogenol) in conjunction with a plan to assist mental performance and antioxidant status.  After 12 weeks, researchers reported that the Pycnogenol group showed a significant 30% reduction in blood free radicals, along with small but significant improvements, including a 16% improvement to mood, an 8.9% improvement to mental performance, a 13.4% improvement in advance sustained attention, and a 3.6% increase in memory.

Pine bark extract is safe, bioavailable and well-tolerated. As Pycnogenol, these benefits have been demonstrated in multiple clinical trials.

Pine Bark Extract supplies inflammation-soothing antioxidant activity that likely supports long term brain health. Its vasodilation benefits (along with other supportive activities) may promote robust cognitive performance, and PBE is one of the most promising research-backed natural compounds for ADD/ADHD.

Pycnogenol is the best form of pine bark extract. It is made by a large, well-established manufacturer that’s conducted dozens of clinical trials and invested heavily in their ingredient to demonstrate safety and efficacy. The drawback is Pycnogenol is more expensive than plain PBE, but we think it’s worth it. 150 mg is a clinically studied Pycnogenol dosage for mental performance, and therefore ideal if budget allows; if not, 100 mg may be another good dosage for brain health.