You are here: Home / Testosterone / Dihydrotestosterone (DHT) — the most powerful and misunderstood male hormone? 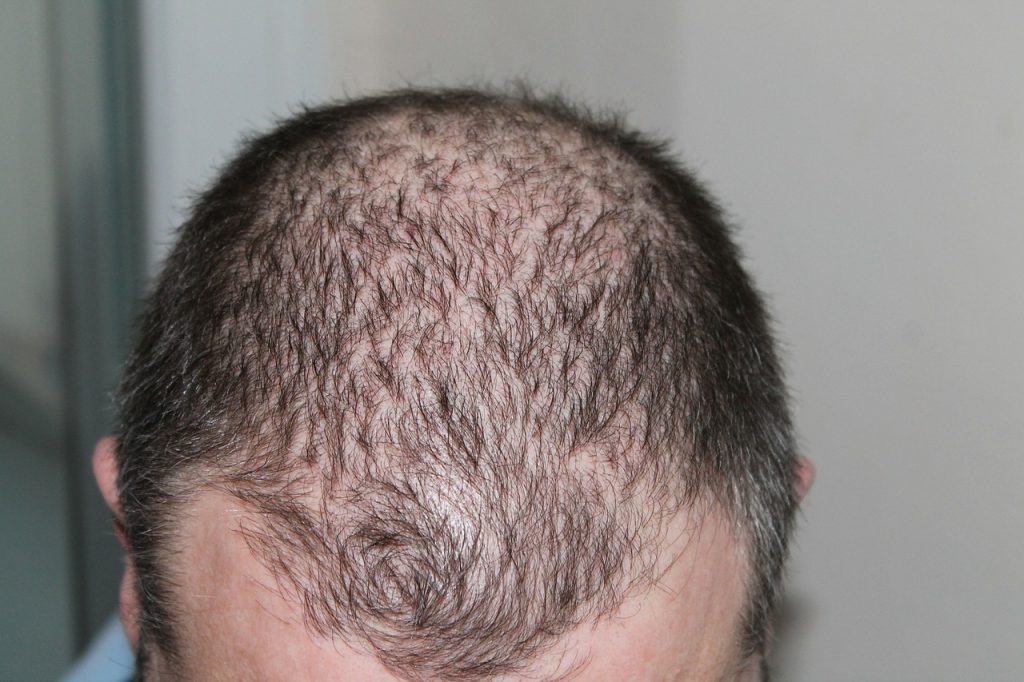 Worried about losing your hair? Then you’re probably also worried about DHT: The androgen hormone that’s been vilified as “The Big Bald Wolf.”

DHT does play a role in hair loss, but that’s based largely on genetics. Essentially, if your genes make your hair follicles vulnerable to the male hormone – then DHT can make you go bald. Conversely, if you’re one of the lucky guys that isn’t losing his hair – then you don’t have to worry about DHT. 1

Hair loss freaks a lot of guys out. So much so that male-pattern baldness treatments and procedures are now multi-million-dollar industries.

While these products make Big Pharma a boat-load of money – they can also cause a multitude of side effects. Impotence, decreased sex drive, decreased ejaculate volume, enlarged breasts and allergic reactions can all result from taking anti-DHT drugs, also known as 5α-reductase inhibitors (5-ARIs).

But is taking these drugs really worth it if you’re experienced side effects? And is DHT truly so bad? Let’s take a closer look at this often-misunderstood hormone.

While testosterone tends to get all the attention when it comes to androgens (male sex hormones), DHT is incredibly important as well. As the name suggests, dihydrotestosterone (DHT) is closely related to testosterone. More specifically, an enzyme called 5alpha reductase (5-AR) converts testosterone into DHT.

Indeed, researchers have even suggested that “most androgen actions are mediated by the 5alpha-reduced metabolite dihydrotestosterone” rather than good old testosterone.2

In essence, then, DHT is a supercharged version of testosterone that:

Women also have DHT, but its role in female health is not entirely clear; the leading hypothesis is that it helps regulate puberty.

As you can see, there’s a noticeable connection between the side effects of 5-ARIs and the benefits provided by DHT. Indeed, this suggests that 5-ARIs can disturb the beneficial activities of DHT by reducing its levels. But what about the link between DHT and the prostate?

Despite the popular belief that DHT is responsible for prostate enlargement and even prostate cancer, scientific research remains inconclusive. What we do know is that DHT stimulates healthy prostate growth during puberty.

It is only in late adulthood that the prostate can begin to enlarge, alongside reduced testosterone and increased estrogen levels. Given this information, the leading theory is that an increase in the ratio of estrogen to testosterone in aging men plays a central role in the development of an enlarged prostate, also known as benign prostatic hyperplasia (BPH).

Having said that, the fact that drugs that prevent testosterone’s conversion into DHT (5-ARIs) are used to treat BPH suggests that DHT does still play a role in the development of an enlarged prostate. But to say that DHT is the direct cause of BPH is false; the biological circumstances are clearly far more complex.

At first glance, it doesn’t look like DHT has any effect on the development of muscle mass. This is because the 5-AR enzyme is missing from skeletal muscle, preventing testosterone’s conversion into DHT.

But this doesn’t necessarily mean that DHT is useless for muscle. A number of recent studies in mice have discovered that DHT plays a role in protein synthesis, amino acid transport into muscle, muscle contraction and relaxation, and even cell signaling, proliferation, and energy production.3 4

In fact, researchers suggest that “DHT treatment may have clinical implications in the management of sarcopenia,” a term for the age-related loss of muscle mass.5Although human studies are needed to confirm and further explore DHT’s benefits for muscle, what we can say for now is that it is premature to write off DHT as a muscle-supporting hormone.

The impact of low DHT

With all this information in mind, it’s clear that DHT is not necessarily the “bad” hormone it’s often made out to be. Although it seems to be implicated in male baldness, DHT is also involved in healthy body function in men, which means that reducing it may not be the best idea.

The consequences of DHT disruption can actually be seen in the case study of a rare disorder called 5-alpha-reductase deficiency. Males born with this condition produce little to no 5-AR, resulting in greatly reduced DHT levels. Although these men have normal testosterone levels and skeletal muscle development, they are typically raised as girls and have little or no body hair, underdeveloped sex organs and disrupted sexual function.

Fenugreek: an example of a DHT-blocker

Fenugreek is a herb used in testosterone booster supplements that works as a 5-ARI. This raises an obvious question: If men are taking fenugreek for its male health benefits, does the supposed boost in testosterone outweigh the inhibition of DHT synthesis? Or, is there a potential net negative effect on male health?

Clearly, the vilification of DHT as a “bad” hormone is overblown. While we don’t dispute that DHT is implicated in many cases of male pattern baldness and that taking anti-DHT drugs can help with the condition, the use of these drugs can come at a cost to your masculinity.

After all, DHT is needed to develop and maintain manly characteristics and sexual health, and even with all the knowledge we have about its function, there’s still a lot of learn about this highly potent androgen. Perhaps we shouldn’t be so quick to discard something that Mother Nature gave us for a reason.