You are here: Home / Nootropic / Binaural Beats for Focus, Studying & Relaxation — and Nootropics that Help 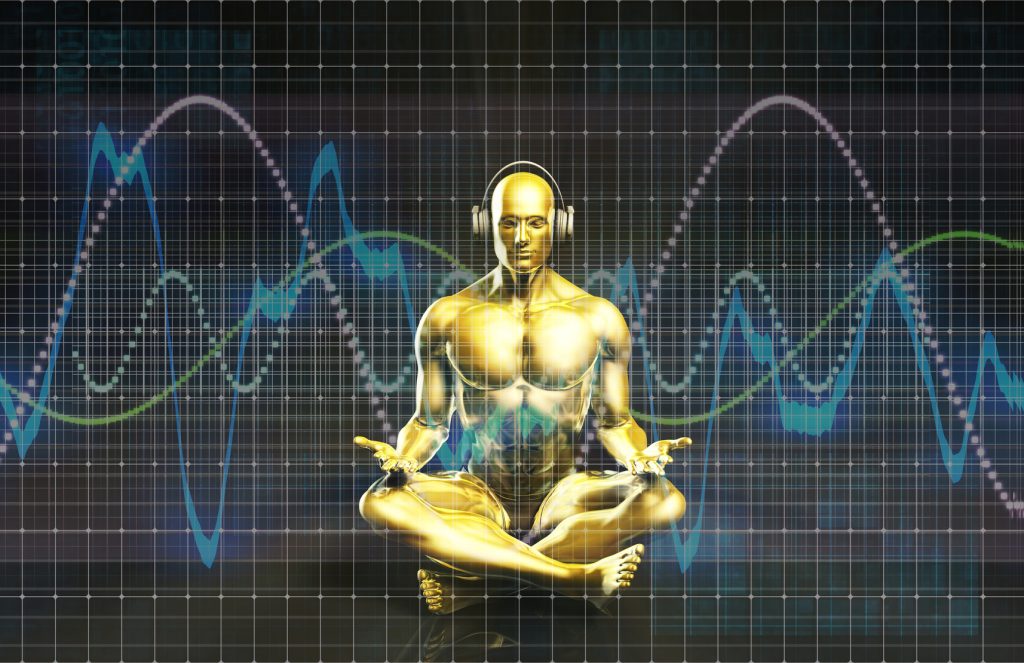 What if boosting your brain could be as simple as popping on a pair of headphones?

With brainwave-modulating binaural beats pumping into your ears, you can do just that. Better still, you can customize binaural beats’ cognitive effects by listening different sound frequencies for different mindstates.

As impressive as binaural beats are on their own for influencing the mind, they get may get better when you stack them with nootropics. In the right combinations, binaural beats + nootropics appear to create potent synergies that amplify brainpower even more — presenting a unique, natural new strategy for achieving peak mental performance.

What are Binaural Beats?

A binaural beat is basically an auditory illusion created by the brain’s response to a separated presentation of sound waves.

When two different audio frequencies are presented separately (usually via headphones), one in each ear, the brain attempts to resolve the difference by creating a third tone. Although the third tone is not being aurally presented like the two physical tones, the brain “hears” the difference between the two signals as if it were another tone.

The body will respond to the brain’s interpretation as if the tone were as physically real as the two original tones, even if the difference is outside the normal human range of hearing- 20 Hz to 20,000 Hz.

For instance, if a tone measuring 500 Hz is played in the right ear and a tone of 510 Hz is played to the left ear, the brain resolves the difference by “hearing” a tone of 10 Hz: This is the binaural beat.

Listen to a Sample Binaural Beat

This quick clip is a 30-second binaural beat in the 10 Hz frequency. Be sure to listen in stereo, ideally with headphones, or else you won’t feel the binaural beats effect:

The Discovery of Binaural Beats

In 1973, American biophysicist Gerald Oster tested the binaural beat phenomenon with an EEG at Mount Sinai School of Medicine in New York, sparking interest in binaural beats as a cognitive and neurological research tool.1

A research team including Thomas Campbell, Dennis Mennerich, and Robert Monroe began to study the effects of binaural beats on consciousness and discovered they could induce desired brain wave states. In 1974, Robert Monroe founded the Monroe Institute, and in 1975 Monroe was granted the first patent for “Frequency Following Sound” (FFR), a method of altering brain waves using sound, now known as Hemi-Sync.2

How Do Binaural Beats Work?

Sound is measured in Hertz (Hz), which uses frequency to determine the properties of a sound wave. Frequency describes how many times a sound wave occurs in one second. According to Oster’s extensive research using EEG, binaural beats created by tones above 1000 Hz are not usually perceived by humans. Some modern supporters claim binaural beat tones are effective up to 1500 Hz, but Oster’s research shows that while a few people did respond at that level, most did not. 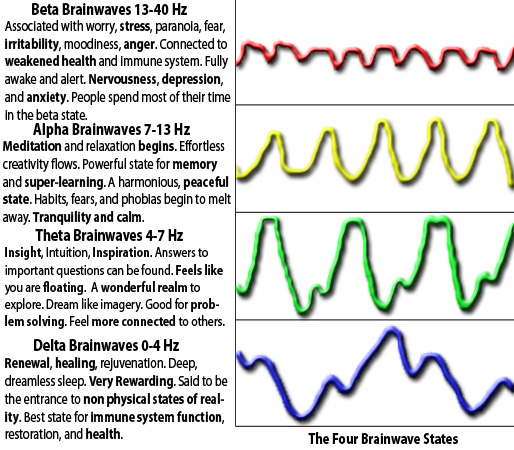 How Could Binaural Beats Improve Brainpower?

A binaural beat connects the two hemispheres of the brain by causing them to work together to solve the “problem” presented by the difference of frequencies perceived in each ear. This hemispheric connection helps the brain to synchronize with itself, and can cause brain waves to entrain to the frequency of the binaural beat. Entrainment is the process in which vibrational waves synchronize with each other into one frequency, or movement. Through entrainment, binaural beats can induce brain waves to match their own frequency.

As a nootropic strategy, listening to binaural beats or music containing binaural could leverage the entrainment phenomena in order to:

More on Binaural Beats for Focus

When the brain is functioning on a beta level- our brain’s go-to mode of operation- it’s easier to experience distraction, anxiety, and other stressful states of mind. Binaural beats within the alpha range of 7 to 13 Hz can encourage the brain to slow its operational state to an alpha state. Alpha states of consciousness are associated with relaxation, improved memory, learning, and concentration. In alpha, the mind is less prone to distraction and able to focus on the task at hand.

Stress affects everyone on a daily basis, and triggers the release of the stress hormone Cortisol which is linked with many damaging effects on the mind and body including lowered immunity, increased abdominal fat, thyroid issues, and reduced cognitive performance.

It can be difficult for many people to get into an alpha or theta state on their own, and binaural beats can help induce these calmer states in a short time without the frustration some people experience while attempting meditation.

Just experiencing a calm, alpha or theta mind state for 10 minutes or more per day can improve both mind and body function, while soothing the emotions and renewing the body’s energetic systems.

This study’s objective was to determine what effects, if any, binaural beat stimulation had on verbal memory formation. 20 participants listened to binaural beats measuring 5 Hz (theta), 13 Hz (beta), white noise, and words. The results showed significant differences in word recall in relation to the stimulation frequencies, with the 5 Hz frequency demonstrating a much higher word recall from the third to fifth days of the study.

Auditory Beat Stimulation and its Effects on Cognition and Mood States

This extensive literature review examines a large number of clinical studies which explore the possibility that binaural beats can affect various areas of human function. This review summarizes relevant studies that research neurophysiological changes of subjects in response to auditory beat stimulation (ABS). Numerous studies investigated differences in response to ABS ranging from theta/delta to gamma frequencies versus controls. The cognitive effects of ABS were explored in areas such as memory, creativity, attention, anxiety, mood, and vigilance (focus) with varying results.

Nootropics that may Enhance Binaural Beats

Oatstraw may increase alpha 2 brain waves, and taking 2500 mg of wild green oat extract (WGOE) orally has been shown to increase concentration and induce a theta brainwave state for up to two hours. 5

L-Theanine also has the ability to boost alpha brain waves, so combining 200 mg of L-Theanine and Oatstraw with a binaural beat may produce a stronger and more effective entrainment to the alpha brainwave state than any of those alone.

Citicoline can help energize the brain by enhancing the firing of neurons and improving the brain’s utilization of energy, while it stimulates the release of brain chemicals like acetylcholine, dopamine, and norepinephrine, known to assist memory, attention, focus, and promote alertness and calm thinking. Taking 1,000 mg to 2,000 mg of citicoline daily while listening to binaural beats may increase alertness while enhancing the cognitive effects of binaural beats.

L-Tyrosine can work as a nice complement to binaural beats because of its ability to support memory and mood through the production of neurotransmitters and suppression of stress hormones, especially during exposure due environmental stressors or sleep deprivation. Try L-Tyrosine (especially in the preferred N-Acetyl-L-Tyrosine form) along with alpha or theta binaural beats to maintain alertness while enhancing mood and memory for relaxed productivity.

Caffeine is not a true nootropic, but it sure is great for alertness. If alpha or theta binaural beats make you feel sleepy, try consuming a little caffeine, which can temporarily boost focus, energy levels, and attention.

Caffeine is available in many forms, but a regular cup of coffee, or perhaps even better-green tea, can provide the extra boost needed to maintain productivity while the brain relaxes into lower frequency brainwave states. Combining caffeine with L-Theanine may further enhance mental performance.6. Too much caffeine can cause side effects that could counteract the benefits of brainwave entrainment, though, so keep your caffeine intake to a reasonable amount for you.

Rhodiola is a root-herb that is famous for being an adaptogen: It possesses potent anti-stress activity. Rhodiola is also nootropic in its own right. One of its mechanisms of action involves suppressing the release of the stress hormone cortisol.7 This bio-activity seems to match up well with binaural beats’ ability to modulate cortisol levels via alpha brainwaves — potentially making rhodiola+binaural beats an excellent natural anti-stress stack.

Try Binaural Beats for Yourself

3 Hours of Creativity and Focus

This purely binaural track is meant to enhance creativity and focus by beginning in theta, moving into alpha, then gamma frequencies.

This track by Yellow Brick Cinema places alpha wave binaural beats against a background of soothing melodic instruments to help you focus and concentrate better to improve productivity during work or study.

Binaural beats take an unusual route to boosting brainpower, but appear to have great potential — especially since they are natural and supremely accessible. All you need is an mp3 player and some good headphones. Nootropic nutrients similarly offer a safe, natural and accessible means of optimizing mental performance in many ways.

They complement each other, working in harmony on brainwaves and brain function. Binaural beats and nootropics may even have synergy: Targeting the same brain pathways from different angles, to unleash even more brainpower together than when used alone.

Whether you’re seeking help with stress reduction, creativity, focus or other cognitive areas, binaural beats and brain supplements form an effective tandem therapy… so pop the nootropic, drop the beat, and tune your brainwaves for peak mental performance.