You are here: Home / Brands / ImmunEnhancer®

ImmunEnhancer® is a patented extract of the western larch tree used to stimulate immune system function. 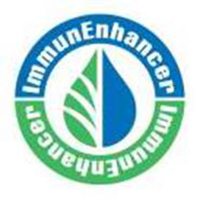 ImmunEnhancer is a patented extract of the western larch tree manufactured by American company Larex. It contains the active ingredient arabinogalactan (AG), a fiber-rich compound shown to stimulate the immune system in clinical research studies, enhancing its ability to protect the body from illness. Compared to standard larch extracts, ImmunEnhancer has the advantage of being patented and recognized as being safe by the FDA (GRAS).

Arabinogalactan works by promoting the growth & activity of immune cells – such as natural killer (NK) and macrophage cells. According to the latest review of research on arabinogalactan “…results suggest a role for larch arabinogalactan in the improvement of immune system and defence against pathogens in humans.” 1

Did you know? Arabinogalactan is a versatile compound; aside from supplements, it is also used in food, animal feed, personal care products, pulp production, printing, and more.

The arabinogalactan used in ImmunEnhancer is extracted from western larch trees through a patented, solvent-free process (US patent 756098). Furthermore, it’s use in supplements, personal care formulations, foods, and other products is also covered by a patent (US patent 6290978).

ImmunEnhancer is primarily used as an ingredient in functional foods, beverages, and supplements meant to improve immune system health and function. This popular use is backed by dozens of cell culture, animal, and human studies highlighting arabinogalactan’s ability to ward off infections (colds in particular) and increase immune system activity.

In addition, ImmunEnhancer also has the potential to improve digestive health. More specifically, arabinogalactan works as a fiber-rich prebiotic that can increase the number of beneficial gut bacteria such as Lactobacillus and Bifidobacterium, and help protect the gastrointestinal tract from disorders such as irritable bowerl syndrome (IBS).

Compared to basic arabinogalactan preparations, ImmunEnhancer has the advantages of being:

ImmunEnhancer has yet to be examined in research studies. However, its main active ingredient arabinogalactan has been extensively studied as an immune system booster.

It’s best to follow supplement-recommended doses. Given the lack of research, it’s best to take doses recommended by individual supplements, which tend to be around 300 – 400 mg.