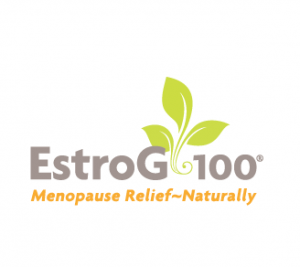 EstroG is a patented mix of three Korean herbal extracts. It is used to alleviate hot flashes, night sweats, dry skin, and other symptoms of menopause. This EstroG-100 review details its advantages over generic menopause supplements:

EstroG-100 is a patented blend of three herbal extracts used to alleviate menopause symptoms. These medicinal plants – Phlomis umbrosa, Cynanchum wilfordii, and Angelica gigas – have a long history of use as a menopause remedy in China and Korea.

EstroG-100’s unique herbal root extract blend was introduced by South Korean biotech company Naturalendo Tech in 2000, where it remains the most popular supplement for symptoms of menopause such as night sweats, insomnia, and bone loss. EstroG-100 is proposed as a superior alternative to hormone replacement therapy (HRT) and other herbal remedies such as black cohosh and soy isoflavones for the improvement of menopausal women’s health.

This is largely due to the fact that studies have consistently shown EstroG to be both safe and effective. By comparison, research suggests that HRT can cause side effects such as weight gain and increase the risk of serious health disorders such as heart disease and stroke,1 while phytoestrogens (e.g. soy isoflavones) may carry similar risks. In addition, black cohosh – arguably the most popular herbal menopause remedy – has shown mixed results in clinical studies.

Since its inception in South Korea, EstroG has become available in USA, Japan, Australia, New Zealand, Russia, and many other countries.

Did you know? EstroG was formulated by a Korean doctor who studied various traditional medicinal plants and tested 71 different plant extracts before settling on a blend of Cynanchum wilfordii, Phlomis umbrosa, and Angelica gigas.

Researchers are not yet entirely sure how EstroG improves menopause symptoms. However, the most popular hypothesis is that EstroG improves estrogen metabolism by acting as a selective estrogen receptor modulator (SERM). Estrogen is the key female sex hormone whose decline is the central feature of menopause.

The use of EstroG’s blend of herbal extracts from Phlomis umbrosa, Cynanchum wilfordii, and Angelica gigas for improving symptoms of menopause is backed by U.S. patent 7763284. Under this patent, EstroG is produced through a hot water extraction method and suggested to work by increasing estrogen levels.

EstroG-100 is used in supplements that alleviate the symptoms of menopause, such as hot flashes, night sweats, dry skin & eyes, insomnia, depression, fatigue, joint & muscle pain,  and vaginal dryness, as well as long-term issues such as increased risk of cardiovascular conditions, osteoarthritis, and osteoporosis. EstroG’s menopause benefits are backed by two human studies – one South Korean and one American.

Although it can be used as the only ingredient in a supplement, EstroG-100 is usually mixed with other compounds such as vitamins, minerals, and other herbs that may help with menopause, such as black cohosh.

Did you know? EstroG also appears to support liver health.

This two part study examined the effects of EstroG-100 on osteoarthritis, a joint condition that frequently occurs after menopause in women. The researchers treated isolated mouse cartilage cells with the extract, showing increases in markers of healthy cartilage such as aggrecan, type 2 collagen a-1, and sox-9, and decreases in markers of cartilage breakdown, such as matrix metalloproteinase-13 (Mmp13), Cox-2, and Nfκb. In addition, the treatment of rats with paw edema – a common model of inflammatory arthritis symptoms – showed that EstroG-100 significantly reduced the symptoms. 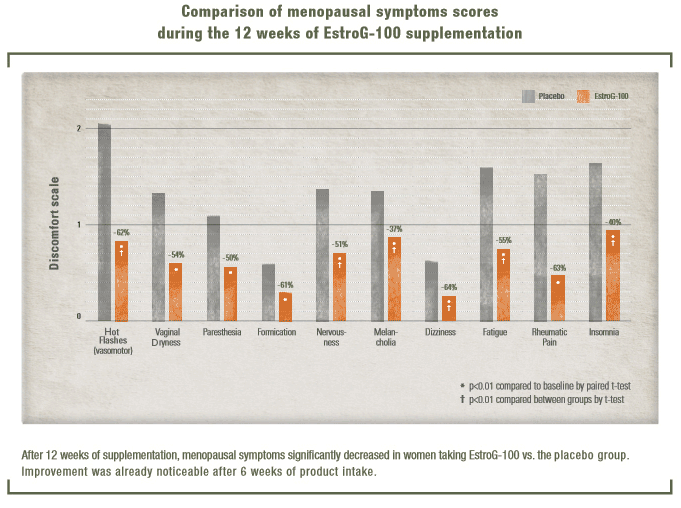 Although only a few clinical trials have been done to date, their findings provide evidence for EstroG’s menopause benefits.

This randomized, double-blind, placebo-controlled study examined the effects of EstroG-100 on menopause symptoms. A total of 64 women were given EstroG-100 or placebo daily for 12 weeks. The supplementation improved scores of menopause symptoms, including insomnia, nervousness, fatigue, and pain. No significant side effects were observed.

This randomized, placebo-controlled South Korean study evaluated the menopause benefits of a branded combination of EstroG’s three plant extracts with vitamins and minerals called Estromon. A total of 48 women with menopause symptoms were given two placebo or Estromon tablets twice a day for 48 weeks. The supplementation improved menopause symptoms in addition to growth hormone levels and markers of bone health, and did not show any significant side effects.

EstroG is a patented, research-backed remedy for menopause symptoms. We recommend giving EstroG a try for both acute (e.g. insomnia, night sweats) and long-term (e.g. osteoporosis and osteoarthritis) menopause complications. This unique herbal blend is backed by patents, research, and a long history of traditional use.

Follow supplement dosages. There isn’t enough research to suggest the ideal dosage of EstroG-100 for menopause concerns. As such, it’s best to follow the dosages recommended by individual supplements.