You are here: Home / Brands / Cognizin®

Cognizin® is a patented, clinically-backed brand of citicoline that is primarily used in nootropic brain supplements.

Cognizin is an enhanced, branded form of the choline-donor brain health nutrient citicoline. Cognizin may offer advantages over other supplement forms of citicoline because it is:

Cognizin Citicoline, manufactured by Kyowa Hakko Bio Co., Ltd., is a clinically studied and patented form of Citicoline, a natural substance found in every cell of the body that is especially vital to brain health. Cognizin is approved in the EU as a Novel Food Ingredient, and may be used in both supplement form and as a food additive to confer its nutritional benefits.

Citicoline is known for its neuroprotective potential, especially in the context of age-associated memory impairment, age-related brain degeneration, head trauma and stroke.1 Citicoline has been used in therapeutic brain applications in the past, but usually as an intravenous agent. This IV use was partly because citicoline in supplement form was unstable when exposed to humidity.

These extra steps help to protect citicoline from moisture, but may create a new set of challenges for both production and finished supplements.

Capsule and pill glazes and coatings are effective, but may affect absorption, bioavailability and digestive comfort, in addition to using synthetic compounds that may not work for consumers who are following a natural lifestyle. Excipients, meanwhile, take up space in citicoline powder — increasing net citicoline dosage and making it harder to include citicoline in multi-ingredient stack supplements.

All of these safeguard steps used in conventional citicoline manufacturing processes may reduce efficiency and increase production costs, potentially leading to a more expensive finished product.

Using a proprietary, patented process, Cognizin produces a hyperhydrated, stabilized form of citicoline. This highly crystalline citicoline form ranges from 10% to 12% water by weight, versus conventional citicoline which is no more than 5% water by weight, and therefore highly susceptible to humidity.

According to Cognizin’s inventors, when citicoline is intentionally exposed to humidity, it absorbs the moisture until it becomes saturated; a natural equilibrium weight of about 12% water.

Using proprietary technology, Cognizin first dehydrates citicoline to an anhydrous state, and then jet sprays the dried power with water, calibrating it for precise moisture levels that enable the formation of citicoline hyperhydrate.

Cognizin is an award-winning ingredient in the nutritional supplements industry: In 2004, it won the NutrAward for best innovative ingredient at Nutracon; in 2011, it received a Product Excellence Award in the cognitive health ingredients category from Frost & Sullivan.

How Cognizin is Used in Supplements

Most importantly, citicoline acts as a choline donor that helps raise brain levels of phosphatidylcholine, an important precursor for the formation of brain cell membranes. More on Citicoline as a Nootropic

Cognizin citicoline has been used in some eye health applications and vision supplements, based on early research that its enhancement of phospholipid synthesis may have a neuroprotective effect that extends to support retinal cells; as well as its ability to promote dopamine, a neurotransmitter that helps with signaling in the retina and optical pathways.

In addition to being used in complex multi-ingredient formulas, Cognizin citicoline is found in single-ingredient standalone supplements, some of which allow for higher dosage.

Where to find Cognizin supplements: Cognizin is one of the more popular branded nutritional supplement ingredients on the market, especially in nootropic brain supplements. There are 35 supplement brands that feature Cognizin in North America; 11 in Europe; and one each on Mexico and Malaysia.

In this study, 16 healthy men and women with an average age of 47 took either 500 mg or 2,000 mg Cognizin® Citicoline every day for 6 weeks and were then evaluated for changes to their brains’ structure and function, using magnetic resonance spectroscopy that measured metabolites in the frontal lobe, which is associated with attention and focus. Researchers reported that both dosing regimens of Cognizin® Citicoline were associated with significant improvements in brain bioactivities, including a 14% increase in brain ATP energy production and 26% faster brain cell membrane turnover (repair, rejuvenation and replacement, collectively contributing to overall brain regeneration). Researchers suggested the lower 500 mg Cognizin dose appeared to be associated with more pronounced brain structure and function benefits. 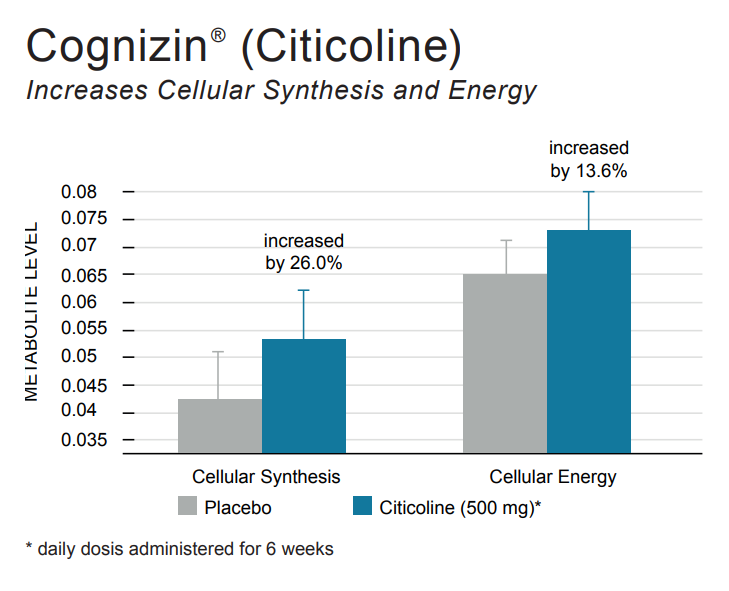 60 healthy women between the ages of 40-60 were split into three randomized arms: 250 mg Cognizin, 500 mg Cognizin or placebo, to be taken daily for 28 days. At the study’s baseline and conclusion, subjects were tested for attentional function using the Continuous Perfomance Test II (CPT-II). Researchers reported that the testing results demonstrated both doses of Cognizin® were linked to higher test scores, which they attributed to improved cognitive inhibition and dopamine transmission. 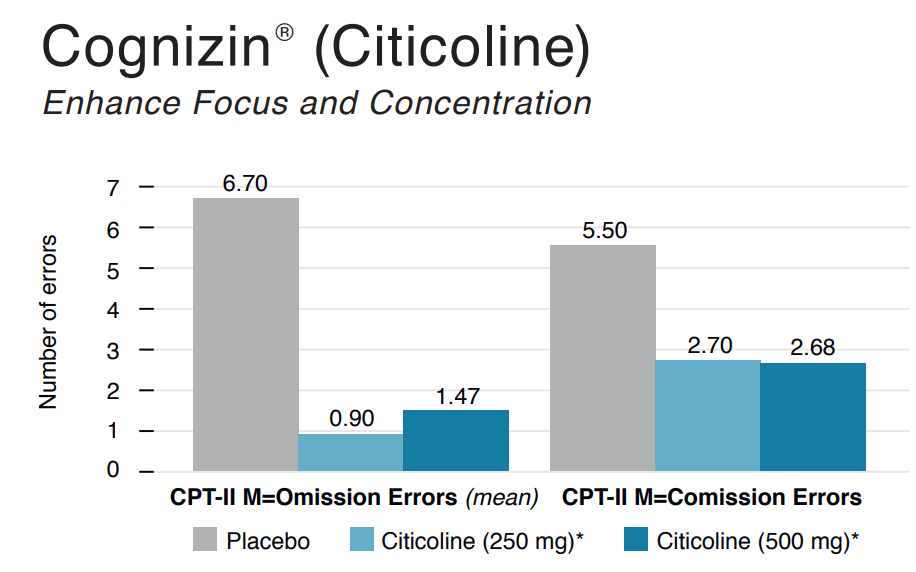 Cognizin may help with attention, psychomotor speed and impulsivity in adolescent males

In this study, 75 healthy male adolescents between the ages of 13 and 18 were split into three groups of roughly the same size and assigned to take Cognizin 250mg, Cognizin 500mg, or placebo daily for 28 days. Neurocognitive assessment was performed at the study’s baseline and conclusion, which included the Finger Tap Test to measure motor speed and control; Ruff 2&7 Selective Attention Test to measure sustained and selective attention; and Computerized Performance Test Second Edition (CPT-II) to measure sustained attention and impulsivity. After analyzing test results, researchers reported that Cognizin citicoline supplementation was associated with improved motor function and enhanced attentional abilities when compared to placebo.4

In this early (and weak) study, 16 healthy adults (men and women) between the ages of 40 and 57 were randomly split into two groups and administered 500 mg or 2000 mg Cognizin daily over the course of six weeks. At the study’s baseline and conclusion, participants completed questionnaires related to food and lifestyle preferences along with brain image scanning that evaluated their responses to foods. Preliminary findings suggested that Cognizin supplementation appeared to be associated with a significant decline in appetite in the high-dose (2000 mg) group only; neither group experienced any changes in weight.

Cognizin is a leading brand of citicoline, which is one of our top nootropic ingredients. Citicoline multi-tasks for both mental performance and overall brain health; Cognizin is the most extensively researched brand of citicoline. In addition, Cognizin’s patented enhancements might more effectively deliver citicoline’s multiple brain-supportive bioactivities while improving stability, shelf life, and formulation flexibility.

Start with Cognizin in the dosage range of 250 mg to 500 mg daily. These Cognizin dosages have demonstrated brain health and mental performance benefits in human clinical studies, and have also been shown to be safe and well-tolerated.