D-aspartic acid (DAA) is a nutritional newcomer, but early research suggests it might have game-changing T booster potential. DAA’s bio-activities include:

The amino acid D-aspartic acid (DAA) is a relatively recent nutritional discovery for human health. For decades, scientists thought DAA only existed within the brains of octopus, squid and cuttlefish. Its presence in mammals—and humans—was only discovered in 1996.2 This short history means research is still early. But so far, evidence suggests DAA might universally support hormonal health.

DAA is present in endocrine systems of both vertebrates and invertebrates. In mammals, DAA exerts a strong influence on sex hormones, especially testosterone, which is what the spotlight is focused on now, as researchers, formulators, and consumers explore DAA’s potential for men’s health.

Despite being naturally generated in the human body, additional DAA is frequently supplemented and consumed in everyday foods, such as soy, oysters, oats, and egg white.

DAA has been theorized to trigger the production and release of hormones throughout the endocrine system, culminating in T-synthesis.3 It is a multi-step process involving several glands in the body4:

With these roles, researchers have said that DAA “seems to play a crucial role in reproduction,” potentially because “it is involved in biosynthesis and the release of sexual hormones.”

DAA: Part of T-synthesis, every step of the way

DAA appears to be involved in each step of male sex hormone production across the hypothalamic pituitary gonadal axis — from the GnRH that starts the process in the brain, all the way through to the testosterone that finishes it in the testes: 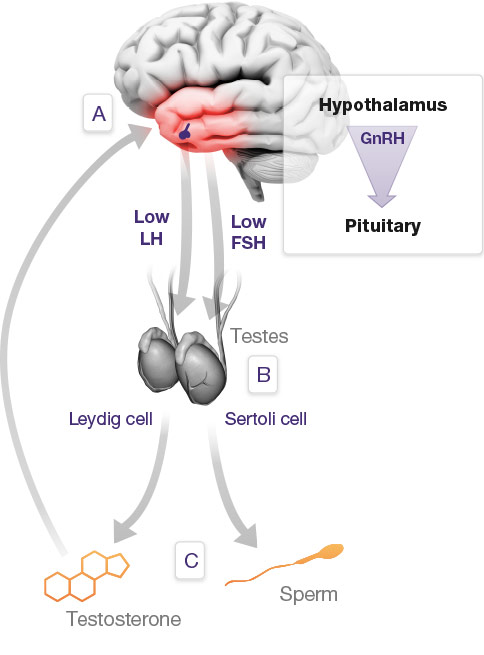 Our take: DAA seems to stimulate and sustain sex hormone production throughout the male endocrine system, enhancing the ultimate measures of male virility: Testosterone and sperm.

A few of these animal studies back the idea that DAA boosts sex hormones across-the-board, affecting both male and female hormones. Although the combined DAA benefits to T and LH appear to outweigh the female progesterone boost, spiking female hormones can still skew testosterone-to-estrogen ratios and disrupt manly balance, if only slightly.

This begs the question: How effective might DAA’s effects be if its corresponding female hormone-boost could be reduced? Accordingly, a potential solution to optimize masculinity may be to combine DAA with female hormone blockers, such as:

The number of clinical studies with DAA is limited because DAA’s presence in humans is a new discovery. Nonetheless, there are a couple of promising studies that stand out.

This placebo-controlled study on DAA and testosterone simultaneously evaluated humans and rats. 23 men were given either a placebo or 10 mL of DADAVIT® containing 3.12 grams of D-aspartic acid, which is a liquid supplement that blended plain “unbound” DAA with vitamin B6, vitamin B12 and folic acid. Rats were given a plain DAA liquid formula. The D-aspartic acid formula was found to significantly increase the release of luteinizing hormone (LH) and testosterone in male humans and rats taking DADAVIT® compared to the control.

In this study, 30 male patients with fertility problems took DAA every day for 90 days, and the men were tested for sperm count, sperm motility, and the success rate of partner pregnancy. DAA supplementation apparently increased sperm count by 160%, enhanced sperm motility, and resulted in more of their partners getting pregnant. Low testosterone seems to have a strong link to low sperm count.

In this placebo-controlled investigation, resistance-trained men were given 3 grams of either a placebo or DAA 4 times a week for 28 days during standard training. In both groups, body composition and muscle strength similarly increased, while testosterone, luteinizing hormone, gonadotropin-releasing hormone, and estradiol levels were unchanged.

In this review, 23 animal and 4 human studies were evaluated and analyzed. The results indicate that though DAA was found to enhance testosterone levels in some studies, it was also shown to have no significant effect in others. The limited number of available studies provide inconsistent information.

The Unsolved Mystery of DADAVIT®

DADAVIT®, used in the human & rat study previously mentioned, was a trademarked supplement developed by the Italian drug firm Pharmaguida. It combined DAA with vitamin B6, vitamin B12, and folic acid with the intention of boosting male fertility. Despite impressive testosterone benefits shown in human research, DADAVIT® rapidly disappeared off the face of the earth with few, if any, remaining records of its existence. You might be able to mimic DADAVIT®’s “lost formula” by taking DAA with B-vitamins, but the exact ratio and forms Pharmaguida used are still a mystery today.

There are two primary forms of DAA, which are most commonly available as capsules or a scoopable powder that can be added to protein shakes or liquids:

DAA seems to be a flat-out sex hormone enhancer. We recommend DAA for its dynamic T-boosting activity. It even made our list for top testosterone supplements for 2017. The  D-AA-CC form is preferred, although you really can’t go wrong with DAA in any form.

Remember how DAA boosts female sex hormones, too? Look for T booster formulas that combine DAA with female hormone blockers such as luteolin. Formulations like these might synergize to unlock DAA’s full T-boosting potential.