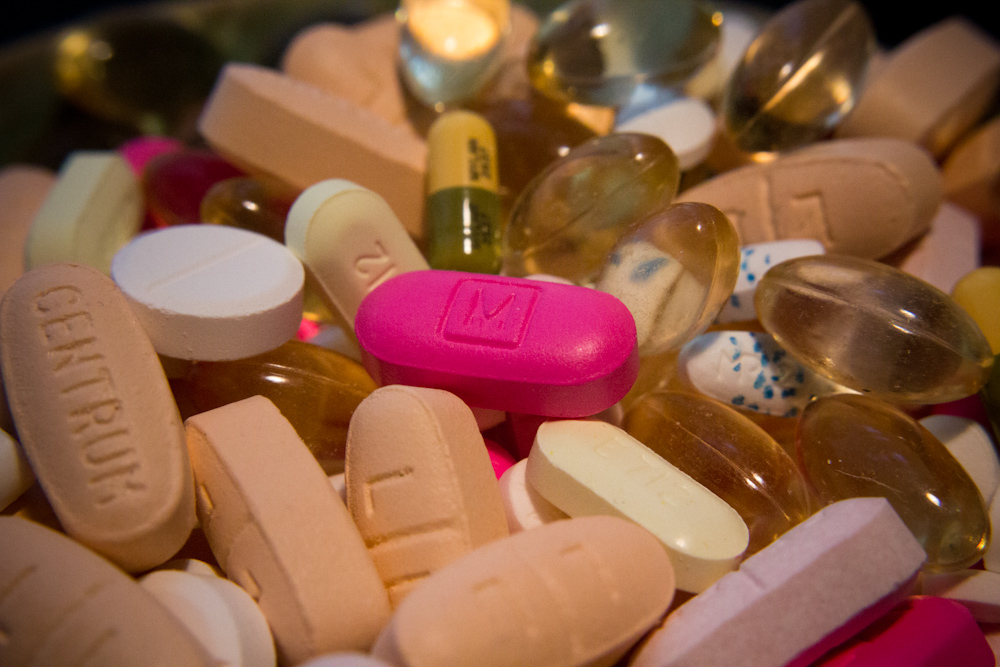 Multivitamin and multimineral supplements help us meet recommended intakes of essential nutrients. And although nutrient deficiency is rare in the developed world, insufficient intakes are still quite common.

Boron (B) is an ultra trace element present in very small quantities in the body. Whether or not it is essential to human health is still being investigated. Thus far, boron is believed to play a part in bone health by:

Boron further appears to have antioxidant and anti-inflammatory properties. Whether or not it needs to be supplemented with is still up for debate. More on boron in multivitamins.

The largest store of a single mineral in the body is calcium (Ca), which is a core component of teeth and bones, as well as a variety of fundamental processes. Consuming the proper amount of calcium is crucial for balancing the density of bones and reducing the risk of developing bone and joint diseases.

On top that, the flow of calcium in and out of cells plays a critical role in the function of many tissues:

Fortunately, calcium is easily obtained from dairy products, and many breakfast cereals and breads are additionally fortified with the mineral. Despite its wide availability in everyday foods, recent research suggests that as much as 38% of the U.S. population may have insufficient levels. More on calcium in multivitamins.

The element copper (Cu) is a trace mineral involved in the production of energy, connective tissue, red blood cells, and the myelin sheath through its interaction with copper-binding enzymes, known as cuproenzymes.

Only a minor percentage of the population faces copper insufficiency, and very rarely are cases of deficiency reported, which is why copper is supplemented in tiny doses, if at all. More on copper in multivitamins.

Magnesium (Mg) is a metallic element that is used by about 300 enzymes involved in making proteins and DNA, producing energy, and sending signals via the messenger molecule cAMP.

The steady supply of magnesium in common foods—cereals, nuts, spices, and leafy greens—makes deficiency rare, although insufficiency in nearly 45% of the U.S. population has been reported. Low levels of magnesium have been tied to cardiovascular complications, diabetes, and bone and joint breakdown. As an addendum, magnesium is also believed to improve the quality of sleep and boost testosterone levels. More on magnesium in multivitamins.

Vitamin A is necessary for proper functioning of the immune system and for healthy vision.

There are two forms of vitamin A in food: preformed vitamin A found in meat, fish, and dairy, and provitamin A present as carotenoids in fruits and vegetables. Its high availability makes deficiency rare, but about 34% of Americans fail to meet daily dietary requirements. Multivitamin supplementation is an easy way to make up for this insufficiency. More on vitamin A in multivitamins.

Also known as thiamine, vitamin B1 is found in several forms, the most active one being thiamin pyrophosphate (TTP). Like other B vitamins, its major role is to to help convert food into energy (ATP) for the body.

Without adequate amounts of vitamin B1, a wide range of neurologic symptoms and disorders, such Wernicke Korsakoff, begin to affect the body. Although vitamin B1 is classified as an essential nutrient, its supplementation is hardly necessary due to its widespread availability in food, such as whole grain cereals, pork, nuts, and beans, to list a few.

Also known as riboflavin, vitamin B2 assists the body with various fundamental processes. As flavin adenine dinucleotide (FAD), vitamin B2 breaks down carbs, fats, and proteins so they can be turned into energy, and transfers electrons for the production of energy via the electron transport chain. It also activates glutathione, which is one of the body’s major antioxidants.

Meanwhile as flavin mononucleotide (FMN), vitamin B2 helps produce vitamin B3 and turn B6 into its active form. Vitamin B2 deficiency is associated quite rare. More on vitamin B2 in multivitamins.

Vitamin B3, or niacin, is a water-soluble vitamin that participates in:

The good news is that plenty of everyday foods, such as processed meats, tuna, and sesame seeds offer more than enough of the vitamin. In addition, the liver can produce small quantities of B3 from tryptophan. More on vitamin B3 in multivitamins.

Frequently referred to as pantothenic acid, vitamin B5 is the precursor of coenzyme A, which is required to convert food into energy (ATP) and produce important biological compounds, including the hormone melatonin, the neurotransmitter acetycholine, and heme – the iron-carrying part of red blood cells.

B5 is naturally present in nearly all categories of food, including fortified whole grain cereals, liver, egg yolk, and mushrooms. As a result, dietary insufficiency of vitamin B5 is extremely rare. More on vitamin B5 in multivitamins.

Vitamin B6 is an essential nutrient that takes on many different forms, among which pyridoxine is the most commonly used for supplementation. It facilitates over 100 reactions in the body, including:

Plenty of vitamin B6 is found in ordinary foods, and the large majority of people meet the recommend dietary intakes. More on vitamin B6 in multivitamins.

Vitamin B7, or more popularly called biotin, is an essential nutrient that assists the function of enzymes involved in cell growth and making glucose, fatty acids, and the branched chain amino acids leucine, isoleucine and valine.

Unlike certain bacteria, yeast, and plants that naturally produce vitamin B7, humans need to consume it through dietary sources. Some of the easy-to-access foods containing vitamin B7 include egg yolk, whole grain cereal, and produce such as bananas and avocados. Vitamin B7 deficiency and insufficiency are relatively rare. More on vitamin B7 in multivitamins.

Did you know? Vitamin B7 used to be called vitamin H.

More commonly known as inositol, vitamin B8 is a sweet-tasting pseudovitamin that is produced in the body and regularly consumed in citrus fruits, whole grains, dairy, beef, and dark leafy greens, such as spinach. Inositol’s most important role is facilitating cell signaling—the communication between cells. More on vitamin B8 in multivitamins.

Also known as folate or folic acid, vitamin B9, is an essential nutrient with a major role in:

Most people get plenty of vitamin B9 from their diet, with particularly high concentrations in leafy greens, making deficiency rare. Pregnant women, however, have a greatly increased need for B9. More on vitamin B9 in multivitamins.

Also known as cobalamin, vitamin B12 is widely recognized as the “energy” vitamin for its pivotal role in energy production. Vitamin B12 is also required for the formation of DNA and blood cells.

Most people get enough B12 from their diets, and up to 2500 µg can be stored in the liver. People susceptible to insufficiency of the vitamin are vegans and those who suffer from malabsorption, such as adults over 50 years old. More on vitamin B12 in multivitamins.

Absorption of vitamin B12 requires the protein intrinsic factor, which is missing in people who have a rare condition known as pernicious anemia.

Vitamin C, or ascorbic acid, is involved in a wide range of critical biological functions, including:

Because of its popularity as an immune booster and antioxidant, vitamin C is arguably the most supplemented vitamin. However, its ease of availability in food makes vitamin C deficiency extremely rare today, although research suggests that its intake in the U.S. is still, on average, roughly 25% below the recommended daily requirement. More on vitamin C in multivitamins.

Vitamin D refers to a group of fat-soluble compounds, two of which are essential for human health: vitamin D3 (cholecalciferol) and vitamin D2 (ergocalciferol).

Vitamin D help sustain the immune system, bone health, and other vital functions. Although salmon, tuna, and other fatty fish contain high concentrations of vitamin D, few other foods do, which is why it is often fortified into milk and breakfast cereals.

Vitamin D deficiency is believed to be the leading nutrient deficiency in the developed world, with one American study finding that as many as 42% of Americans are deficient and 70% have an intake below the recommended daily requirement. More on vitamin D in multivitamins.

Vitamin E consists of various fat-soluble compounds that are called tocopherols and tocotrienols. The primary function of vitamin E is to safeguard cells from harmful free radicals by acting as an antioxidant.

Although vitamin E deficiency is very rare in today’s day and age, as many as 60% of Americans have insufficient levels, which makes supplementation that much more valuable. And while high concentrations of vitamin E are found in sunflower seeds, almonds, and vegetable oils, the highest percentage of vitamin E consumption actually comes from fortified foods. More on vitamin E in multivitamins.

Vitamin K was initially made famous for its role in blood clot formation. Since then, it has also been found to play a role in bone maturation and reduction of unwanted calcium accumulation in blood vessels. Deficiency of vitamin K is rare. More on vitamin K in multivitamins.

Zinc is an element and essential trace mineral involved in a plethora of biological processes, including immunity, brain function, protein and DNA synthesis, wound healing, and reproduction.

Although rare in developed countries, zinc deficiency affects as many as 2 billion people worldwide. Vegetarians are especially susceptible to zinc insufficiency due to the abundance of phytic acid in seeds and vegetables, which reduces zinc absorption. More on zinc in multivitamins.